“In order to build this 10,000-square-foot estate along the oceanfront in Cape Cod, Massachusetts, the homeowners had to give eight of their original 12 acres of property to the national preservation trust.”

Excerpts from House of Extremes Article by William Kissel

When a designer and his wife wanted to build their dream house on the oceanfront Florida lot where their current home sat, they didn’t relish the inconvenience of packing and moving into temporary housing while their property was under construction. So they asked their ¬contractor, Steve Paskoski of Fort Lauderdale, if he could figure out a way to build the new 12,000-square-foot house “around and over” the existing 3,000-square-foot structure so they wouldn’t have to move. 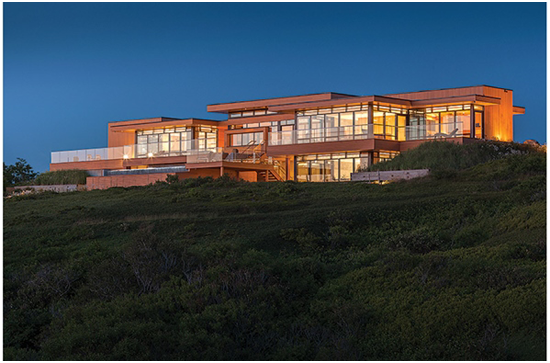 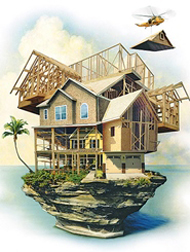 “It essentially looked like an egg inside a box; it was an incredible challenge,” recalls Paskoski, one of the country’s leading high-end residential home builders. “Once we had the new house built over and above, we took the roof off of the existing house and ran the walls up 5 or 6 feet — ultimately connecting it spaceshiplike to the floor of the hovering structure — so you would never know it was two homes at one time,” says the big-ticket contractor, adding that such unusual requests are no longer an anomaly but the new norm in luxury-home building.

Meanwhile, Paskoski went to great heights, literally, to create a 20,000-square-foot home at St. Andrews Country Club in Boca Raton, Florida.,. “The homeowner saw this picture of a honeycomb in a magazine and wanted it recreated in the house,” says Paskoski, who, in the tradition of Addison Mizner, handcrafted the spectacular ceiling design out of 300-year-old pecky cypress 25 feet above the home’s expansive family room. Paskoski also installed a pneumatic glass-cylinder elevator — like those once used in offices and banks to transport documents across the room. “He didn’t want an elevator because he’s very fit and athletic for a man over 80. But I convinced him that he would never go to the office after the first time if we didn’t put something like this in,” recalls Paskoski. The lakefront estate was later voted “house of the year” by the Construction Association of South Florida and helped establish Paskoski as one of the top 500 residential contractors in the U.S. by Qualified Remodelers magazine.

For Paskoski, just getting a house built across the country posed its own sort of challenges. “We just finished a 10,000-square-foot oceanfront estate in Cape Cod, Massachusetts. I’m in Fort Lauderdale, so that was interesting, supervising a job that far away,” he says. “We built a house for this couple down here, and they wanted someone they could trust in Massachusetts, so they hired us. I hired some local trades for the mechanicals, but for the finish trades, I had people drive up from Florida and had to put them up from week to week in order to complete the project.” The job ended up being an uphill battle for both contractor and homeowner. “The homeowner originally bought 12 acres, and he was forced to give eight of those acres to the national preservation trust just for the privilege of building on the oceanfront property,” says Paskoski.

Paskoski’s current project in Coral Gables, Florida, though, is among his most complex. “When we started, it was 80 pages of drawings and now we’re up to 400,” he says of the future 17,000-square-foot home. “Every time we turn around, the homeowners and their architects are growing the project. But when it’s done, it will be one of the most unique homes ever built.”

A bold statement, to be sure, for someone who has built some of America’s most spectacular estates.